"Who's Vroomin' Who?" is the third episode in Season 2 of Duncanville, being the fourteenth episode overall.

Duncan starts racing stock cars to get away from his mom, but it turns out they make a great racing team. Jing demands a room renovation, so she can secretly spend more time with Kimberly, while Jack struggles with the project. 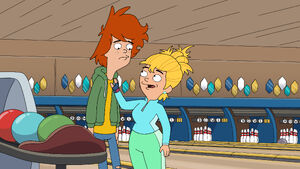 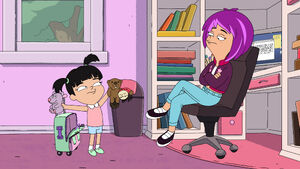 Jing wants her bedroom to be changed so Jack tries to renovate her room while she rooms with Kimberly. Meanwhile, Annie comes to realization that Duncan has outgrown her when he decides to bowl with his friends instead of her. They see a stock car racing field where Mia is working at and Duncan takes the wheel of the car she is sponsoring. Annie ends up joining him and the two become an unstoppable racing team. Kimberly grows tired of Jing and learns that Jack is nowhere near finished as he struggles for a theme, so she takes control and finish the room. Jing admits that she simply wanted to hang out with Kimberly and the girls bond. While happy at first, Duncan begins to dislike their team name as "Mama's Boy" and becomes embarrassed. Bex informs Annie of this and she decides to let Duncan drive himself. He turns out to be a disaster and Annie joins him again, though they end up in sixth place. Afterwards, Annie lets Duncan be with his friends as he promises to go bowling with her again. At night, the Harrises all communicate with walkie talkies.