"Red Head Redemption" is the second episode in Season 1 of Duncanville.

Duncan's friends replace him with Kimberly in their online video game tournament, so he joins the opposition to betray them and humiliate Kimberly. Meanwhile, Annie tries to force Jack to throw out all his old memorabilia cluttering the garage. 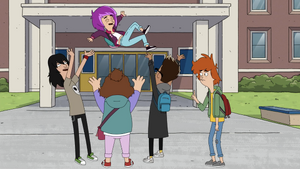 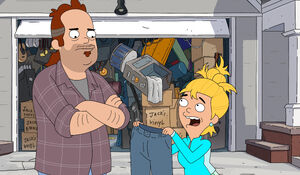 Annie demands that Jack clean out the garage of all his concert memorabilia, but finds that he is unable to do so due to sentimental value. While playing an MMORPG with his friends, Duncan has his younger sister Kimberly fill in for him briefly. When he returns, she proves to a better player than him. Duncan's friends find out and have Kimberly replace him. Feeling low, Duncan turns to a rival team, the Gnome Alone Dads, and asks to join them for an upcoming tournament. To get back at Kimberly, Duncan discovers a shrine in Kimberly's room revealing that she has a crush on his friend Wolf. Jack attempts to throw out Annie's stuff as payback, but when their adopted youngest Jing decides to toss her things away, Jack and Annie give up on their feud and head to the tournament. Duncan's team plays his trump card, but upon seeing his parents arrive, Duncan and Kimberly give up on their feud with Duncan telling everyone that the shrine is his. Duncan's friends win and apologize for abandoning him.