February 16, 2020
The "Pilot" is the broadcast premiere of Duncanville.

Wanting to impress Mia, Duncan asks his mom Annie to teach him how to drive. 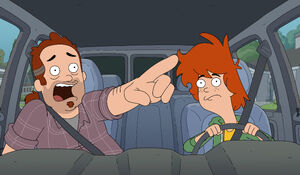 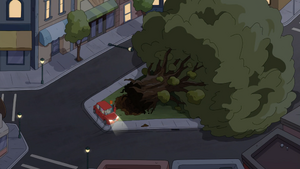 Duncan Harris is an awkward teen who fantasizes about being a man. He is pressured by his parents to take up driving, but refuses because he does not think it is necessary and because his father, Jack, will not stop panicking when he drives. Duncan suddenly takes up an interest in driving to impress his friend and secret crush, Mia. While his mother, Annie, is happy at first, she becomes concerned when she realizes it is for a girl and bans him from going to an electronic music festival when his friends invite him. He sneaks out and they have the time of their lives. However, when driving home, Duncan accidentally knocks down Ol' Oakie, the city's oldest tree. His family finds out the next day and they reprimand him for his actions and refuse to speak to him. Duncan gets with his friends and they save a section of the tree stump that Annie and Jack carved their names into when they were younger. The family forgives him, but they are all forced to live in their car as their house gets taken over by the cicadas living in the stump.