Mia Abara is a main character in Duncanville. She's a genderfluid person who Duncan has a crush on and also his friend. She is voiced by Rashida Jones.

Mia is very sweet and nice. She is good friends with Duncan, Wolf, Bex, and Yangzi. She is an activist who believes in feminism and individualism. She really likes Duncan, but does not want to be anyone's "property".

Mia's dad is shown in Duncan's fantasy but not her mom. Mia mentioned her mom in "Crimes and Misters Demean Her", but we have not seen her yet. 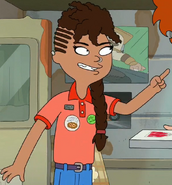 Mia in her uniform.
Community content is available under CC-BY-SA unless otherwise noted.
Advertisement