Black
Kimberly Harris is the sister of Jing and Duncan Harris and is the middle child of the family. She is also one of the three anti-heroic main cast members, alongside Duncan and Jack. She is twelve years old[1] and a middle-schooler.[2] She attends Oakdale Middle School. She is voiced by Riki Lindhome.

Her hair is dyed purple and wears braces. She wears a purple jacket and a white shirt that bares her belly button, along with her light-blue jeans and black shoes.

Killer K is the gaming alias that she receives in “Red Head Redemption” when she captures the flag after Duncan substituted her. After winning the tournament, she still continues her crush with Wolf.

In "Witch Day" she wishes to go to the annual Witch Day festival alone so that she can spend tie with a boy she met last year, despite scaring him away and her crush on Wolf, she hopes to see him again next year.

In the third plot of "Sister, Wife”, Kimberly becomes mad with being ignored and tries receiving negative attention from everybody -- even Pennywise -- to no avail. When she returns home she takes her anger out on the family and tells them resolve their relationship issues, at the end of the episode Pennywise reappears to take up on kidnapping her, but Kimberly gets him to go away.

Suzy Q is a musical alias she receives in Sister, Wife.

Ravine Queen is what she calls herself in Wolf Mother.

Kimberly is shown to be awkward, spoiled, antsy, & sassy but she does love her family. She struggles to be popular in middle school, and when that fails, she gets bullied and takes it out on Duncan.

She doesn’t like when her family forgets or ignores her like in “Sister, Wife” but she managed to get their attention in the house by yelling about solving their problems. 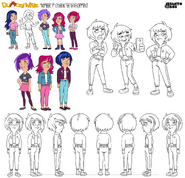