When their local swimming pool is overcrowded due to a heatwave, Annie and Jack share their old swimming spot with the kids. Everything is awesome, until a rich resident buys the land, drains the swimming hole and takes the kids to court for trespassing. Then, Annie’s court confrontation with the rich resident leads to her getting her own public access court show. 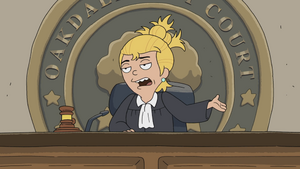 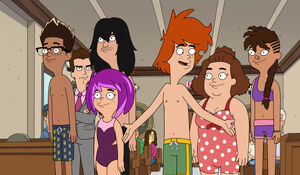 On the hottest day in Oakdale, Jack and Annie remember that they used to go to a swimming hole in their youth and take the kids there. They end up enjoying their time together, but on the way home, Annie sees an illegally parked vehicle and discovers that it belongs to a rich man named Neil LaDouche. LaDouche contests his ticket, but Annie manages to get him to pay up. Mayor Jen, seeing Annie's argument, decides to make her the lead in a public access series called Judge Annie with Jack as her bailiff. Duncan and Kimberly bring their friends to the hole and have a good time. When they revisit the next day, they discover that LaDouche has bought the land. They bring the case to Annie, but she is powerless to do anything. The kids all skinny dip in protest against LaDouche. However, the Squirrel Man, a supposed mythical legend, appears and reveals that he has squatted in the land for 50 years and thus owns the property. LaDouche is kicked out, the kids enjoy the hole, and the Squirrel Man says Annie stopped being a judge.