Black
Jing Harris (aka Little Missy) is Duncan's youngest sister. She attends Oakdale Preschool and is voiced by Joy Osmanski.

Joy Osmanski has said in interviews that Jing is five years old.[1]

In "Sister, Wife," both Duncan and Jack Harris express uncertainty as to whether she is four or five years old, both alternating in confusion between both numbers.

In "Fridgy," Jing states she's five. Kimberly also complains about being "ghosted by a five-year-old."

In Gamer vs Gamer Jing describes herself as being five, holding up all the digits of her left hand (3 fingers 1 thumb) and the index finger of her right hand.

She wears a light pink shirt with a white collar and blue shorts. Her shoes are mint green with white socks.

She is intelligent and regularly willing to give Duncan advice.

A much younger Jing

Jing with her hair down 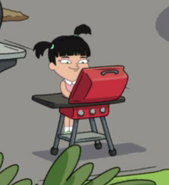 Jing cooking on her Baby BBQ.

Jing peeking through the door.

She is the Harris counterpart of: