When the family gets a new smart fridge that turns out to be too smart for Annie's liking, she feels replaced. Jack and the kids see no harm in the fridge's increasing invasions of their privacy until they realize that the appliance company that sold them the refrigerator has questionable motives. 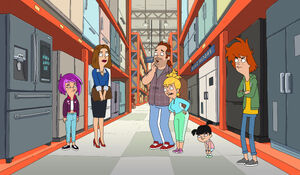 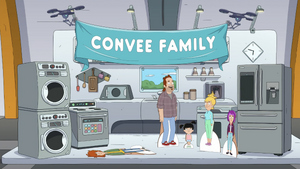 The Harrises' refrigerator finally breaks down after years of use and they head to the store to buy a new one. They are greeted by Janine who presents them with a smart fridge from ConVee. The Harrises are happy with the fridge, which they name Fridgy, as it can perform all of their tasks and chores giving them ample time to do the things they have always wanted to do. However, Annie is shocked when she realizes that Fridgy keeps a tab on many of her personal things, such as having sex with Jack on the kitchen floor, and finds herself left out of the family's personal time. When she confronts Fridgy about it, it locks the Harris family in the house. They escape, but are taken to the ConVee headquarters where Janine wants them to be the family of the future. Annie gives a speech about making an effort and the family agrees with her. Janine threatens to kill them, but the family has the appliances fight one another and they escape the exploding base. The family dig up their old busted refrigerator and "enjoy" their family time together.