Black
Duncan Harris (nicknamed Dunkie) is the titular anti-heroic protagonist of the Fox animated sitcom Duncanville. He is one of the three anti-heroic main cast members, alongside Kimberly and Jack. He is voiced by Amy Poehler.

Duncan is a tall boy with red, wild, unkempt hair and pale skin.

Duncan has a bad posture which he initially says in Pilot will cause him problems later in life. In Red Head Redemption his sister calls it a "pre-scoliosis hunch".

In "Undacuva Mutha" it is mentioned that Annie bought him a back brace, but he hates wearing it as it makes his back uncomfortable.

In Clothes and Dagger he says his scoliosis lets him move in ways his opponent can't anticipate.

He wears a green sweatshirt over a yellow shirt, blue pants, and gray slip-on shoes.

Duncan is easily influenced by his hormones and has a tendency to make bad decisions. He heavily relies on other people like his sister Kimberly in "Red Head Redemption" as he needed her to play his game for him while he was away.

He is apparently not too well known in school, as Classless President reveals many students wrongly think his name is Steve.

He can also be rude at times, and has a tendency to be disrespectful (most likely due to having quite a dysfunctional family). But, despite this, he cares for his family and friends equally.

He has a crush on Mia Abara. 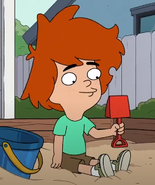