"Duncan's New Word" is the second episode in Season 2 of Duncanville, being the thirteenth episode overall.

Duncan says the one thing no kid should ever say to their dad, which shifts their power dynamic and forces Jack to confront his own father. Meanwhile, Kimberly and Jing have a window to do whatever they want, as Annie and Jack deal with Duncan's issue. 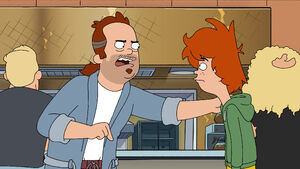 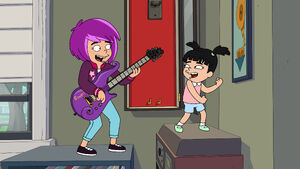 Duncan goes to hang out with his friends and Mia offers him to hang out at her house. Duncan ends up overstaying his curfew, forcing the Harrises to go to pick him up. Annie forces Jack to go and confront him and the situation escalates until Duncan yells "F*** you, Jack!" and runs away. Despite his praise at school, Mr. Mitch forces Duncan to empathize and he begs Jack to punish him. However, Jack actually respects Duncan for what he has done because he could never do the same with his father, Dick, and decide to visit him in the nursing home. Meanwhile, Kimberly and Jing take advantage of the situation by doing things unsupervised. They try to ride a horse but discover that it was Annie's police horse before she abandoned him and she apologizes. Duncan and Jack meet Dick who seems genuinely remorseful of his actions, but Duncan realizes that he is on pills and berates Jack again and Duncan as well. Jack finally yells "F*** you, Dick!", resulting in an irate Dick knocking him through a window, and he and Duncan happily drive home.