"Das Banana Boot" is the premiere episode in Season 2 of Duncanville, being the twelfth episode overall.

Duncan avoids summer school for the first time, and the family goes on vacation. On their getaway, Annie and Jack are haunted by another vacation couple, while Duncan agonizes over Mia's Instagram, and Kimberly gets a glow-up. 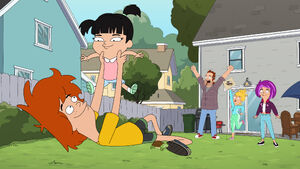 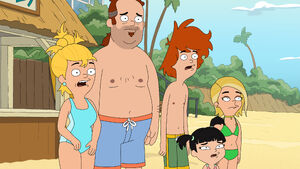 Duncan discovers that he does not need to take summer school as all he needs to do is pass a physical exam and the family can have a full on vacation. After doing so, the Harrises go on vacation to a resort, but Duncan becomes nervous when he sees Mia hanging out with another guy, Kimberly decides to change her look to impress a boy named Jeremy, and Jing desperately wants to make an art piece to go on the fridge. Jack and Annie meet a couple named Nick and Nina, but they become too close to them. Annie wants to have a family moment on a banana boat and forces Jack to break things off with the couple. However, Nick and Nina get revenge by stealing their banana boat, during which Kimberly discovers that Jeremy's real name is Norm and has similar problems to her. The Harrises get the boat, but think they have killed Nick and Nina. They turn out to be alive and like to scam hotels. Upon returning home, Jing makes artwork that gets put on the fridge and Duncan learns that Mia was with an ex, but that she was not interested in getting back.