May 17, 2020
"Classless President" is the eleventh episode and Season 1 finale of Duncanville.

Duncan runs for class president against Mia, but soon realizes the competition is more than he bargained for. Meanwhile, Kimberly participates in a cookie fundraiser. However, when she pulls a sneaky trick, she quickly learns what goes around, comes around. 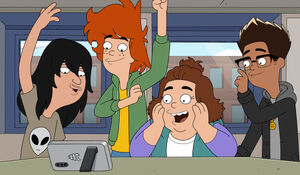 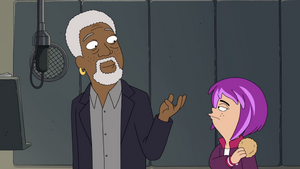 Mia is running for class president, but is disappointed that no one is running against her. She convinces Duncan to run where, to her astonishment, he takes to it easily when he promises everyone whatever they want at the school. He ends up winning; effectively taking the school over with a bunch of ridiculous promises and rules due to an old treaty. Meanwhile, Kimberly must sell cookies for her school in the hopes that she can hang out with the mean girls. She feigns failure to Jack and Annie who, along with Jing, sell all of her cookies. They discover Kimberly's ruse and get back at her, by convincing her that the cookies were poisoned; forcing her to recollect them all. Eventually, Duncan realizes the pressure of being class president, but cannot resist the urge to invite internet stars, the Fabulous Flossing Bears to the school. Mia convinces everyone that things need to go back to normal and calms the bears when they go on a rampage. Duncan apologizes for ignoring Mia's warnings and she forgives him by agreeing to eat nachos with him.