Black
Bex is Duncan's female friend. She attends Oakdale High School with him. She is voiced by Betsy Sodaro.

Her friends treat her like a boy in the pilot, and she comments on how she has boobs.

In "Red Head Redemption", when they are at the video game tournament, she mentions that she's wearing nothing underneath her cosplay outfit for the team "You've Got Chainmail", which Yangzi and Duncan seem to notice. 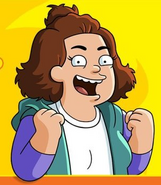